Skip to content Skip to navigation
Resources and Information on COVID-19 Ask a Question
UNIVERSITY OF CALIFORNIA, MERCED

Tubbs Fire in Sonoma County is most destructive in state history 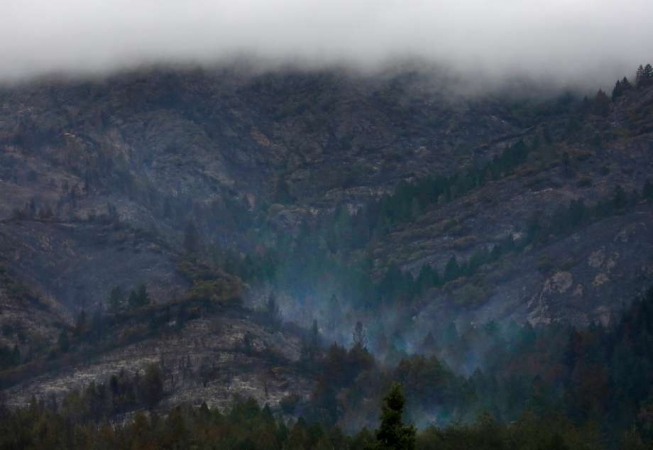 The onslaught of fires that laid waste to huge swaths of Northern California this month reached a new level of infamy Friday when the 36,432-acre Tubbs Fire in Sonoma County became the most destructive wildfire in modern state history.

The fire, which destroyed an estimated 5,300 structures, surpassed the October 1991 Tunnel Fire, which obliterated 2,900 homes and killed 25 people in the Oakland hills, as California’s most damaging fire.

“The latest count on the Tubbs makes it by far the most destructive fire in our state’s history,” said Daniel Berlant, the assistant deputy director for the California Department of Forestry and Fire Protection, or Cal Fire. “I don’t think anyone going to bed that night could have imagined that we’d have this kind of activity and this much destruction. It’s just not the kind of perfect storm that can be anticipated.”

Two other fires that also broke out on Oct. 8 joined the Tubbs on the top 10 most destructive list — the 54,382-acre Nuns Fire, which wiped out at least 1,200 structures in Sonoma County, is now sixth, and the 51,624-acre Atlas Fire, which ravaged at least 741 homes and wineries in Napa and Solano counties, is 10th on the Cal Fire list.

The Tubbs Fire alone killed 22 of the 23 people confirmed dead in Sonoma County, making it the third deadliest wildfire in California, behind the Tunnel Fire and the 1933 Griffith Park Fire that left 29 dead in Los Angeles County.

The Redwood Valley Fire, which was among the cluster of fires that broke out nearly two weeks ago, is now the 10th deadliest fire in California history. Eight people died in that fire, which destroyed 36,523 acres and 545 structures in Mendocino County.

Twenty-one wind-driven fires broke out starting about 10 p.m. on Oct. 8 and spread overnight from ridge to ridge, through canyons and into neighborhoods in eight California counties. Propelled by gusts of up to 78 mph, dry air and warm temperatures, the flames spread rapidly and erratically, incinerating huge chunks of neighborhoods while sparing random houses and adjacent communities.

In all, the deadly blazes wrecked about 8,400 structures, burned through more than 245,000 acres — nearly 400 square miles — and prompted 100,000 people to evacuate, many with only the clothes they had on. The flames were so intense, especially in the Fountaingrove and Coffey Park neighborhoods of Santa Rosa, that they produced fiery tornadoes, flipping cars, uprooting trees and ripping garage doors from their hinges.

At least 42 people were killed in the deadly cluster of fires, but that number is likely to go up as recovery teams continue to sift through the smoldering rubble looking for remains. At least 37 people are unaccounted for in Sonoma County and three in Napa County.

Firefighters are investigating what started the wildfires. Teams of investigators are also analyzing the behavior of the various fires and what, if anything, could have been done to prevent their level of destruction.

The biggest problem in most of the fires, Berlant said, was the countless embers that were carried a half-mile to a mile in front of the flames. The embers rained down and ignited homes, which fell like dominoes, he said.

Firefighters in Southern California are used to clusters of wind-driven fires at this time of year. In October 2003, Santa Ana winds fed the ruinous Cedar Fire in San Diego County, which consumed 2,820 structures and is the third most destructive fire in the state, and the Old Fire, in San Bernardino, which wiped out 1,003 buildings and is seventh on the list.

But Berlant said nobody has seen anything like what just happened in Northern California, when extreme offshore gusts, known as Diablo winds, blew in at night and lit up like a blast furnace.

“We’ve had north winds that have blown at night, but we typically don’t see offshore winds in the night hours,” he said, referring to winds blowing in a southwesterly direction toward the ocean. “The wind is usually coming in from the ocean at night” and is therefore cooler, wetter and less likely to spread fire.

The fire situation in Northern California improved dramatically Thursday night and into Friday as the first rain since the fires started fell throughout the region.

The fire zones of Napa and Sonoma counties received more than six-tenths of an inch of rain. The area around Santa Rosa, the city hardest hit by the disaster, got 0.68 inches, according to the National Weather Service. The much-needed precipitation boosted optimism that the devastating flames will soon be controlled.

Rain also reached the fire zones in the Santa Cruz Mountains, with four-tenths of an inch recorded in the Boulder Creek area, where the Bear Fire sparked Monday night at a building and spread to 391 acres. The blaze injured seven firefighters, destroyed four structures and threatened about 150 homes. It was 45 percent contained Friday.

All the other fires in the region were approaching full containment, meaning dirt or natural fire breaks had almost been completed around the edges of the fires. The Tubbs Fire was 94 percent contained and the Atlas Fire, which killed six people in Napa County, was 87 percent contained Friday. The Cascade Fire, which killed four people in Yuba County, was fully contained, according to Cal Fire.

Fire officials predict full containment on all the fires — including the Pocket and Nuns fires — by Tuesday.

“The drum that we were beating the whole time (was that) we were fighting the weather,” Jones said. “It seems like we got exactly what we needed.”

Meanwhile, evacuees from Coffey Park were allowed to return to the Santa Rosa neighborhood Friday just as Pacific Gas and Electric Co. announced it had restored service to almost all of the nearly 400,000 customers who lost power in fire zones.

Once they were allowed in, the returnees slowly circled the ruined area, surveying the wreckage.

Reneé Hernandez wasn’t ready for the onslaught and wanted peace as she mourned the burnt-out shell of her home, where, the night before the fire, she and her children had tearfully buried their longtime pet Chihuahua, Chewee, underneath a jasmine bush that no longer exists.

“We’re just shocked and depressed,” she said. “We’re sifting through our lives trying to find something. We miss a lot of things.”

Berlant said the trick going forward is not just to throw money and resources at the problem, but to work with public agencies and politicians to improve education and planning and push for more fire safety provisions in building codes. Cal Fire plans to increase prescribed burning in the winter and initiate fuel reduction and other fire prevention projects in communities, he said.

It’s important because California’s warm season — when fires are likely to do the most damage — has increased by 75 days a year since the 1970s, according to studies by LeRoy Westerling, co-director of the Center for Climate Communication at UC Merced.

Westerling and other climate scientists predict Northern California and the Sierra Nevada will have to deal with hotter, more frequent fires in the future as a result of global warming.

“We will never completely prevent every wildfire. They were a natural part of California’s ecosystem long before we got here,” Berlant said. “It’s about adapting and making sure we are prepared.”