In 20 Years, Wildfires Will Be Six Times Larger 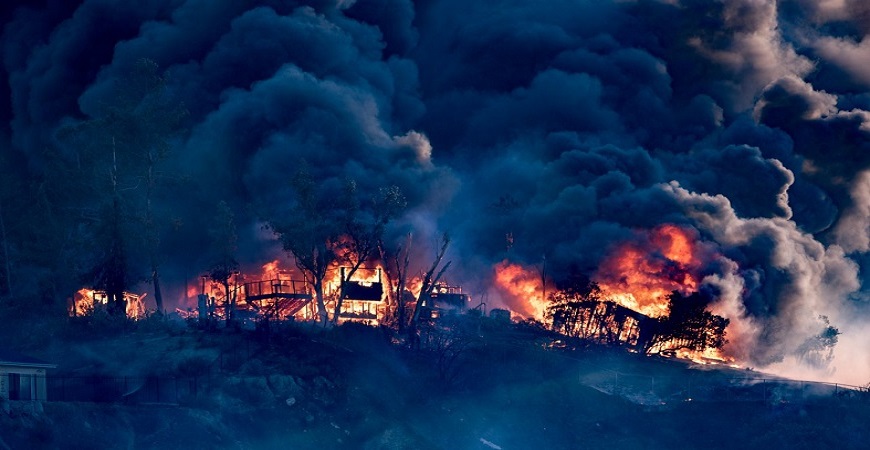 From Montana to California, wildfires in 2017 shattered record after record and cost the Forest Service an unprecedented $2 billion . The blazes ravaged rural landscapes and business centers and claimed dozens of lives , including those of at least two firefighters. This season’s bone-dry winter conditions in the southern Rockies could set the stage for another taxing fire season in the West. If it’s starting to feel like the weather pendulum is favoring one side of the extreme, that’s because it is.

Over the next two decades, as many as 11 states are predicted to see the average annual area burned increase by 500 percent, according to a recent study . That would mean a small fire, say 100 acres, becomes, on average, a 600-acre fire, with Idaho, Montana, New Mexico, and Nevada expected to increase 700 percent in burn size. It’s a grim picture for future fire seasons—one that might be inevitable, because researchers have been able to check their work from current trends.

Scientists from the University of Arizona, the Universidad Nacional del Comahue in Argentina, and the University of California, Merced, analyzed more than three decades of fire occurrence, seasonal temperatures, and snowpack trends throughout western North America to calculate how climate regulates wildfire. By 2039, the researchers estimate there will be 50 fewer days of snowpack in much of the West and a four-degree Fahrenheit increase in average temperature. Both trends will create longer fire seasons that burn much more land.

“This model is essentially saying that fire is going to increase a lot in the interior continental U.S. But that’s only true to a certain point. It’s going to stop being true when those forests can no longer support that kind of fire,” says LeRoy Westerling, a professor of complex systems management at the University of California, Merced, and a co-author of the study. When that happens, the landscape is going to look really different. In less than a generation, drought and fires in western North America could reshape some forests into dry scrublands, where only smaller, water-hardy, and fire-resistant trees thrive.

To check their math, the researchers ran historic climate data from 2004 to 2015 and compared it to their model predictions for 2010 to 2039. The five-year overlap period verified the model’s accuracy. It also showed that every western state where wildfire was expected to at least double by 2039 had already blown past that threshold, suggesting that even the most drastic forecasts for wildfire in the West have probably underestimated the destruction to come.

“Even if we make really major efforts, the truth is a lot of these systems are going to be pushed past the brink by midcentury or soon after,” Westerling says. “That goose has already cooked.”

In California, Dave Shew, a staff chief with the state’s Department of Forestry and Fire Protection, has already seen a glimpse of what fire seasons of the future could look like for the rest of the western United States. The study’s model suggests California could see anywhere from a 10 to 150 percent increase in area burned by 2039. “It’s gotten to the point now where we’re reluctant to use the term ‘fire season’ because we’re seeing fire impacts running year round now.” When fires were still raging last December, Shew knew the state had entered uncharted territory.

“The amount of destruction that everyone witnessed and the speed at which these events occurred were unbelievable,” Shew says. “We’ve seen big fires, but to have both Northern California and Southern California affected by sieges of this type, almost simultaneously, is unprecedented.”

By the end of 2017, California had witnessed the costliest, longest, deadliest fire season in its history . Entire neighborhoods were reduced to charred moonscapes and, as the Los Angeles Times phrased it, “ lonely chimneys .” Now the most populous state in the country is scrambling to stave off an increasingly unpredictable force of nature. From upping controlled burns to incorporating more fire-resistant materials into city planning, like those found in the wildland-urban interface, all options are on the table.

“We wouldn’t traditionally think of needing to build a neighborhood deep inside the city limits with those kinds of building standards. But now officials are considering if those kinds of higher fire-resistant materials should be used in the rebuilding process,” Shew says. “If you look at a neighborhood like Coffey Park in Santa Rosa, very few people—if anyone—anticipated that the community would be at any risk for a wildland fire event, yet it was virtually completely eliminated. We don’t have any reason to believe that these types of events won’t continue to happen. It’s just a matter of time.”

If this study is any indication, the countdown has already begun.