Dry Days Ahead For California This Year And Beyond, Experts Say 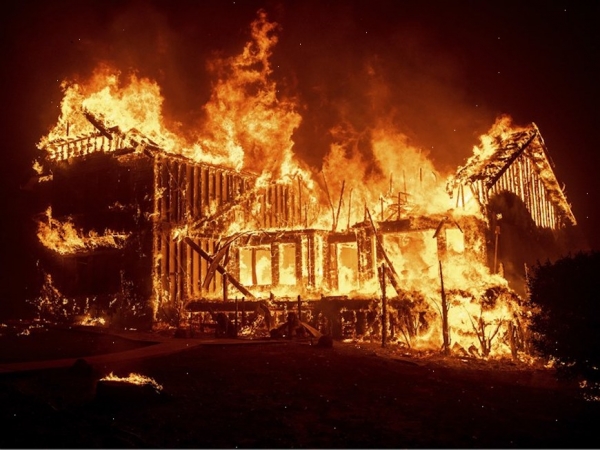 Meteorologist Emily Heller says the weather lately reminds her of what Northern California saw in 2018 just before the Camp Fire set the town of Paradise ablaze. For weeks, there was no rain, excessive heat, and dry winds.

“The Camp Fire started November 8, and we hadn't gotten any rain to that point,” said Heller, who works with the National Weather Service in Sacramento. She said the first rains typically come in October. But for the rest of this October, rain isn’t in the forecast. Fire season won’t end until rain storms fully soak the region, she says, and until then fires could spread easier because of wind, so people should do whatever they can to prevent fires from igniting.

“From now until we get some rain people should be cautious about … anything that can spark,” she said about doing basic chores like lawn mowing. Chains on trailer hitches should be checked to make sure they aren’t dragging because they can also spark on pavement, she added.

Current weather conditions — the lack of humidity, warm temperatures and gusty winds — are what climate scientists have predicted will get worse as the climate crisis grows.

During recent heat waves across Northern California, temperatures in the Central Valley reached above 100 degrees for several days — on multiple occasions. Climate scientists from UCLA, UC Merced and Stanford recently found that dry, warm and windy weather could become more common in the autumn months.

“We found that the occurrence of extreme fire weather conditions in autumn have already doubled as a result of the climate change,” said UCLA climate scientist Daniel Swain of data points from 1979 to 2018.

Autumn Days With High Fire Risk Have Increased In California

Over the past 40 years, California has seen an increase in autumn days with extreme fire weather. These numbers represent the average number of days in the state each September, October and November where the Fire Weather Index was in the highest 5%, meaning fire risk was very high.

Swain and his colleagues found that the number of ideal fall days for a wildfire to start has jumped from four to 12 over almost four decades. And indeed, those fire conditions have helped give way to some of the largest and most destructive fires in the state’s recent history, they say.

“The last several years we have seen a really substantial delay in the arrival of the wet season, and that's created more opportunities for fires” said John Abatzoglou, a UC Merced climate scientist and co-author of the recent fire study.

For example, Abatzoglou says 80% of the state had a very high fire risk score on Sept. 7 and 8, and weather conditions on those days helped two major fires flourish — the Creek Fire near Fresno and the North Complex Fire near Oroville. Those fires are still burning.

Abatzoglou and other researchers found that in the Sierra mountain range, there is a high fire risk about eight days a year. The number of days is important, scientists say, because each potential fire could cost billions of dollars — and take months —  to put out. Stanford climate scientist Michael Goss expects that number to grow by three or four days in the coming years, which is a significant increase, he says.

“Wildfires in California are not going to sort of slow down in the future. They're going to continue or get worse,” Goss said. “We need to have a system in place that's prepared to handle that.”

Over the next 80 years, climate scientists predict that California will see a growing number of autumn days with extreme fire weather. These smoothed projections show the trend of how many high fire danger days researchers predict California may see each September - November through 2100.

Although Swain says he is optimistic that rains will come before January, he’s keeping his “fingers crossed” that a major rain event will come sooner rather than later. He says unless there’s “a widespread precipitation event,” fire season isn’t going away anytime soon.

The addition of more “fire ready” days have stemmed from just a one degree rise in global temperatures, and have resulted in some of the worst wildfires in history, says Stanford climate scientist Noah Diffenbaugh, co-author of the study with the University of California researchers.

“Another degree of global warming on top of that, and we can be confident it will increase the occurrence of extreme wildfire weather further,” he said. “The trajectory we've been on will likely lead to greater than three degrees, and potentially four or five degrees.”

Despite the dismal warnings, their study isn’t all bad news. The scientists look at future fire danger accounting for scenarios in which greenhouse gases are being emitted at both higher and lower levels than they’re being emitted now. If greenhouse emissions are lowered, experts say the number of fire-prone days in California could be reduced, but other factors such as fire suppression are also at play.

While the authors acknowledge that a lot of the damage of climate change is already in progress, they say even greater effects can be mitigated.

“There's always the comfort of knowing that there is something that can be done to … prepare  for the disasters that we know are bound to come,” Goss said. “What's already baked into the future is not something that's going to end the world. It's something we should try to mitigate and prepare for.”