As we move into winter and what is typically the wet season for the western U.S., the 2020 fire season is finally winding down. But the damage is done: nearly 14 million acres have burned across the nation, about double the 10-year average and the most acres burned since reliable record-keeping began in 1983.

Five of the six largest fires in California history and three of the four largest in Colorado history all burned this year. This dramatic increase in the acres burned by immense wildfires is being driven by fires which are burning hotter and more intensely than they used to.

In fact, according to a new study, there's been an eight-fold increase since the mid-1980s in annual area burned by high-severity wildfires — defined as a fire that kills more than 95% of trees. The transformation in fire behavior has happened fast, with this exponential increase happening in just one generation over the course of 30 years.

These more intense fires have a lasting impact on the ecosystem.

"As more area burns at high severity, the likelihood of conversion to different forest types or even to non-forest increases," said Sean Parks, a research ecologist with the U.S. Forest Service Rocky Mountain Research Station and lead author of the new study.

In the new study, Parks and John Abatzoglou, an atmospheric scientist at the University of California Merced, used satellite imagery to assess fire severity in the western U.S. from 1985 to 2017. The team specifically looked at the area burned at high severity because those fires are more likely to significantly impact forest ecosystems, human safety and infrastructure.

Since 1980, the average temperature in the western U.S. has increased by 2 degrees Fahrenheit. That may not sound like much, but the extra heat energy leads to increased evaporation and drier brush. That, combined with a climate that has been experiencing less rainfall in recent decades, has led to one of the worst megadroughts in 1,200 years, of which 50% can be attributed to human-caused climate change.

The graph below illustrates the connection between warmer temperatures and acres burned. In 2020 alone 10.7 million acres burned in the Western states, about triple the highest annual total on record. 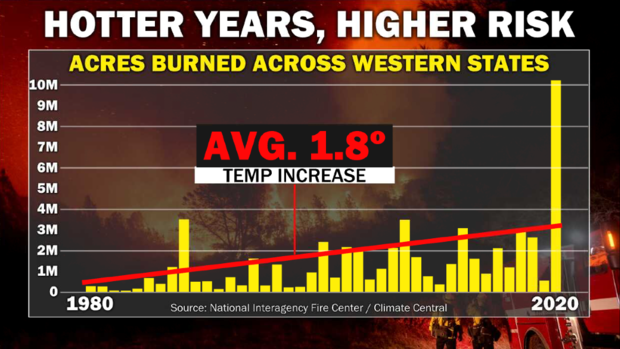 As the climate warms, wildfires in the west are getting larger. CBS NEWS

Routine wildfire is a natural and healthy aspect of forests. Cyclical fire acts to eliminate the less healthy parts of the ecosystem, recycles nutrients back into the soil and clears out overgrown vegetation. This not only helps maintain a healthy ecosystem, but also helps naturally reduce fuel so that fires don't become too large.

Most trees are well adapted to these routine fires. In the mountainous slopes of California, for example, ponderosa pines, sugar pines and giant sequoias have thick bark that keeps the living tissue underneath insulated from extreme heat. Some tree species also drop their branches which grow closest to the ground. That helps impede fires from climbing up into the canopy and more easily spreading.

For some trees fires are necessary for reproduction. Jack pine trees depend on the high temperatures created by fire to enable their glued-tight cones to open up so that their seeds can disperse, allowing new saplings to sprout.

The catch is that these trees evolved to cope with frequent, low-intensity fires. During a severe fire, even the most well-adapted trees can be overwhelmed by the extreme heat. If too many trees die, forest regrowth can be hampered by the lack of viable seeds. 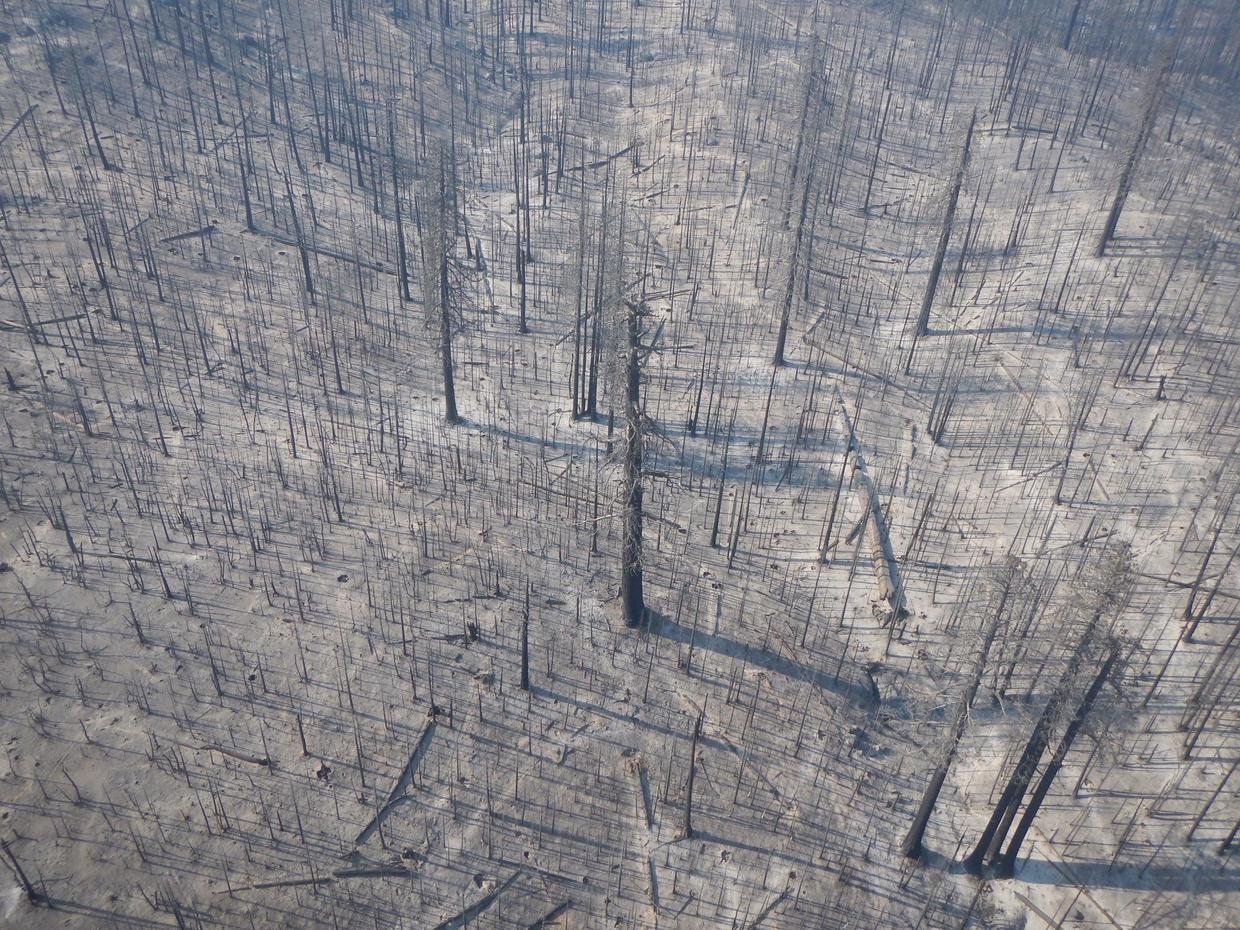 The 2020 Castle Fire killed 100% of the trees, including giant sequoias, on this site in the Sierra Nevada, California.CURTIS KVAMME

At the same time, Parks says, the warmer and drier post-fire climate is making it increasingly difficult for seedlings to establish and survive. This makes it harder for forests to return to their pre-fire condition.

As a result of the more severe fires in recent years, in a 2019 study, Parks found up to 15% of intermountain forests in the western U.S. are at risk of disappearing. In drier regions, like the deserts of the southwestern states, that number increases to 30% because fires tend to burn there under even more extreme weather.