These Changes Are Needed Amid Worsening Wildfires, Experts Say

Wildfires are ravaging the West — in California alone, five of the largest blazes on record have all struck in just the past four years — offering a deadly reminder that the nation is far behind in adopting policies widely known to protect lives and property, even though worsening fires have become a predictable consequence of climate change.

This summer has brought another horrific run of disasters. “This could be the greatest loss of human life and property due to wildfire in our state’s history,” Gov. Kate Brown of Oregon said on Wednesday, a day after invoking an emergency act to address wildfires that have triggered evacuations along the McKenzie Valley and in the state’s southwest.

Colorado is dealing with infernos like the Cameron Peak Fire west of Fort Collins, with more than 100,000 acres burned. Washington State has seen more than 300,000 acres burn, including 80 percent of the town of Malden. California, with a record 2.5 million acres burned so far, has 14,000 firefighters working to contain 25 major wildfires even though “this year’s fire season has another four months to go,” according to the state’s fire agency, Cal Fire.

The worsening wildfire disasters mean the United States needs to drastically rethink its approach to managing fire in the decades ahead, experts warn. “The first step is to acknowledge that fire is inevitable, and we have to learn to live with it,” said David McWethy, a fire scientist at Montana State University.

Millions of Americans are moving into wildfire-prone areas outside of cities, and communities often resist restrictions on development. A century of federal policy to aggressively extinguish all wildfires rather than letting some burn at low levels, an approach now seen as misguided, has left forests with plenty of fuel for especially destructive blazes. This is all in an era when global warming is creating a hotter, drier environment, loading the dice for more extensive fires.

Some cities and states have taken important steps, such as imposing tougher regulations on homes built in fire-prone areas. And there has been movement toward using prescribed fires to scour away excess vegetation that can fuel runaway blazes in forests and grasslands.

But these changes are still happening too slowly, experts say, and have been overtaken by the rapid increase in wildfires.

“At this point we’ve learned a lot about how to engineer homes and communities so that they can be more survivable,” said Max Moritz, a wildfire expert affiliated with the University of California, Santa Barbara. “But these lessons aren’t being implemented fast enough.”

The root cause of global warming is human behavior, and a major part of the solution is to reduce fossil fuel use, which pumps planet-warming gases into the atmosphere. But meantime there are steps that can lessen the wildfire damage even as countries work to cut emissions. 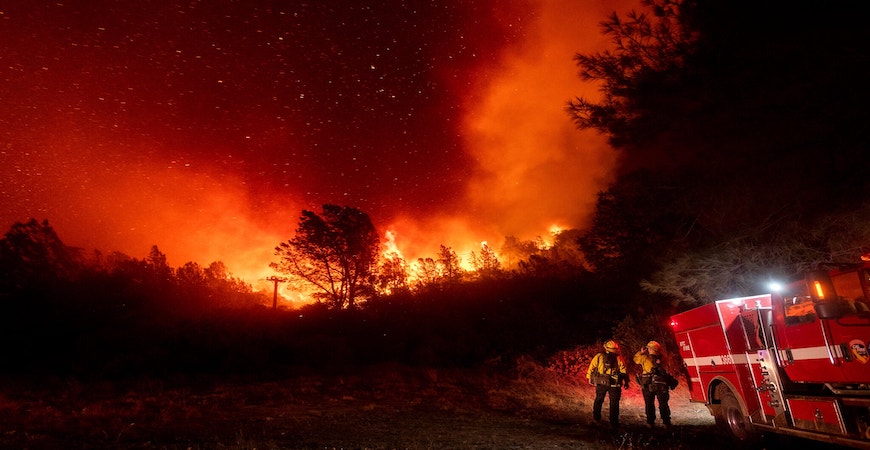 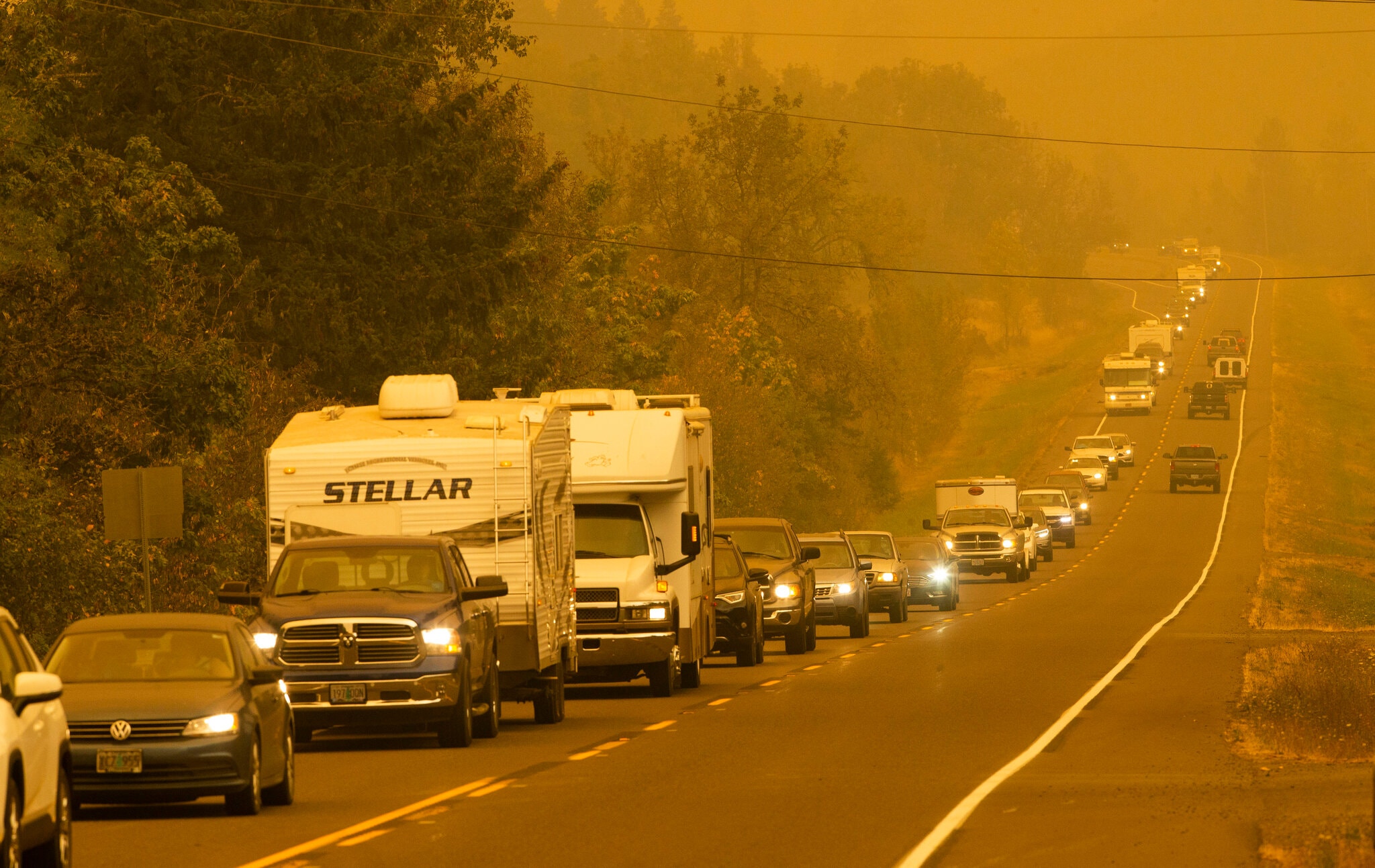 Evacuees around Springfield, Ore., as wildfires moved in on Tuesday.Credit...Chris Pietsch/The Register-Guard, via Associated Press

One major reason that wildfires are becoming increasingly costly is that more Americans are moving to areas outside of cities near forests, known as the wildland-urban interface. Between 1990 and 2015, one study found, 32 million new homes were built in these areas. Only about 15 percent of the wildland-urban interface has been developed, and further growth is expected.

Some people move to be closer to nature, or because housing costs are lower, and policymakers are unlikely to stop all growth. But, experts said, governments could impose tighter restrictions on future development to ensure that communities are better protected against wildfire when it arrives.

That would include measures like designing subdivisions and homes so that they have more surrounding “defensible space,” cleared of brush and vegetation, to keep blazes at a distance. It would mean building houses so they are protected against drifting embers, which often cause structural fires by blowing into homes through vents in the eaves or sides.

In 2008, California adopted rules requiring new homes in high-risk fire areas to meet minimum standards on fire-resistant construction and access to water for firefighters. But many Western states don’t even have that, and it is up to local communities to adopt their own codes.

Last year, Austin, Tex., one of the fastest-growing cities in the country and at high risk of wildfires, adopted strict rules for new development in the wildland-urban interface. New homes will need noncombustible screens over attic vents, for instance, and safe storage of propane tanks.

Yet progress remains patchy. In many regions, developers have resisted new regulations. And in California, which is dealing with a statewide housing shortage, opponents have warned that more stringent requirements could drive up home costs.

Many communities also underrate the risk that wildfires will come to their doorstep.

“Until it happens in your own backyard, you feel it’s very tangential,” said Kimiko Barrett, a wildfire researcher at Headwaters Economics, a nonprofit research group. “You don’t think of wildfire risk as something that will happen to you, until it does.”

Some of the communities that have taken the strongest steps to deal with wildfires did so only after suffering their own tragedies.

In 1990, after the Painted Cave Fire hit Santa Barbara, Calif., burning 427 homes and killing one person, the nearby community of Montecito took action. The local fire protection district now works with residents to harden homes against fire, strategically thinning out native shrubs on private property and requiring changes in building codes, such as wider driveways for fire engines. 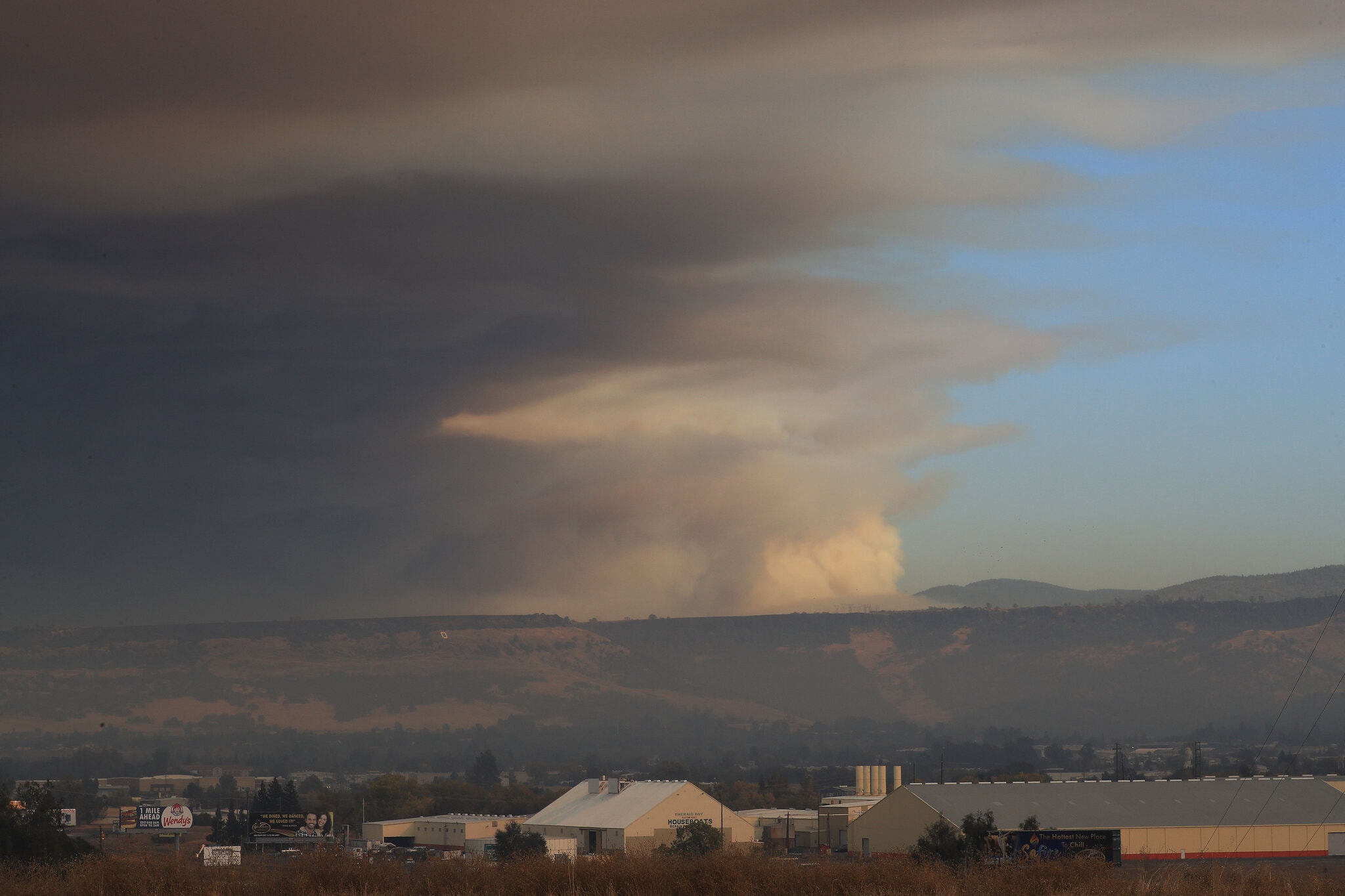 Those efforts were tested in the Thomas Fire in 2017, when high winds brought flames to Montecito’s doorstep. This time, only seven houses were destroyed by fire.

But even when a community does suffer from wildfire, the pressure to rebuild quickly, and without costly new regulations, is often intense.

In addition, building codes for new construction only go so far, because they don’t address the millions of homes already built. Consider the Camp Fire that devastated Paradise, Calif., in 2018, killing 85 people. One analysis found that about 51 percent of the 350 single-family homes built to California’s new codes escaped damage. But of the 12,100 homes built before then, only 18 percent were undamaged.

Retrofitting millions of existing homes can be expensive. For instance, single-pane windows are at risk of breaking from the heat of a fire, allowing embers in. But replacing those windows with sturdier glass can potentially cost $10,000 for a single home. In California, legislation to retrofit existing homes against wildfires has stalled over questions of funding.

Other communities are coming up with their own creative solutions.

In Boulder, Colo., county officials worked with insurance companies on an incentive program set up after the Fourmile Canyon Fire in 2010 burned dozens of homes. Residents can have a specialist visit and identify steps to reduce fire risk, such as removing certain trees or cleaning dead leaves from gutters. Homeowners who comply have a better chance of getting insured.

Experts also say both the federal government and states will need to rethink their approach to managing forests.

For over a century, firefighting agencies have focused on extinguishing fires whenever they occur. That strategy has often proved counterproductive. Many landscapes evolved to burn periodically, and when fires are suppressed, vegetation builds up thickly in forests. So when fires do break out, they tend to be far more severe and destructive.

The Forest Service has programs to thin out forests, removing smaller trees and brush. But those efforts remain relatively modest, and funding is a hurdle: The share of the Forest Service’s budget devoted to fighting fires has risen from 15 percent to 55 percent in recent years, leaving less money to prevent fires in the first place. And forest-thinning programs can be poorly targeted, researchers have found, as they often support logging efforts, rather than effectively reducing fire risk.

Scientists who study wildfires agree that allowing forests and grasslands to burn periodically — by, say, intentionally setting smaller fires under controlled conditions — can be a more effective way to clear out vegetation. In Ponderosa pine forests, for instance, low-level fire can nurture ecosystems and help prevent destructive large-scale fires from breaking out.

This already occurs in the Southeastern United States, where officials use prescribed fires to burn millions of acres each year. While the region still sees destructive blazes — like Tennessee’s drought-fueled Great Smoky Mountains fires in 2016, which killed at least 14 people — experts credit the use of controlled burns with sparing many Southeastern communities from fire damage. 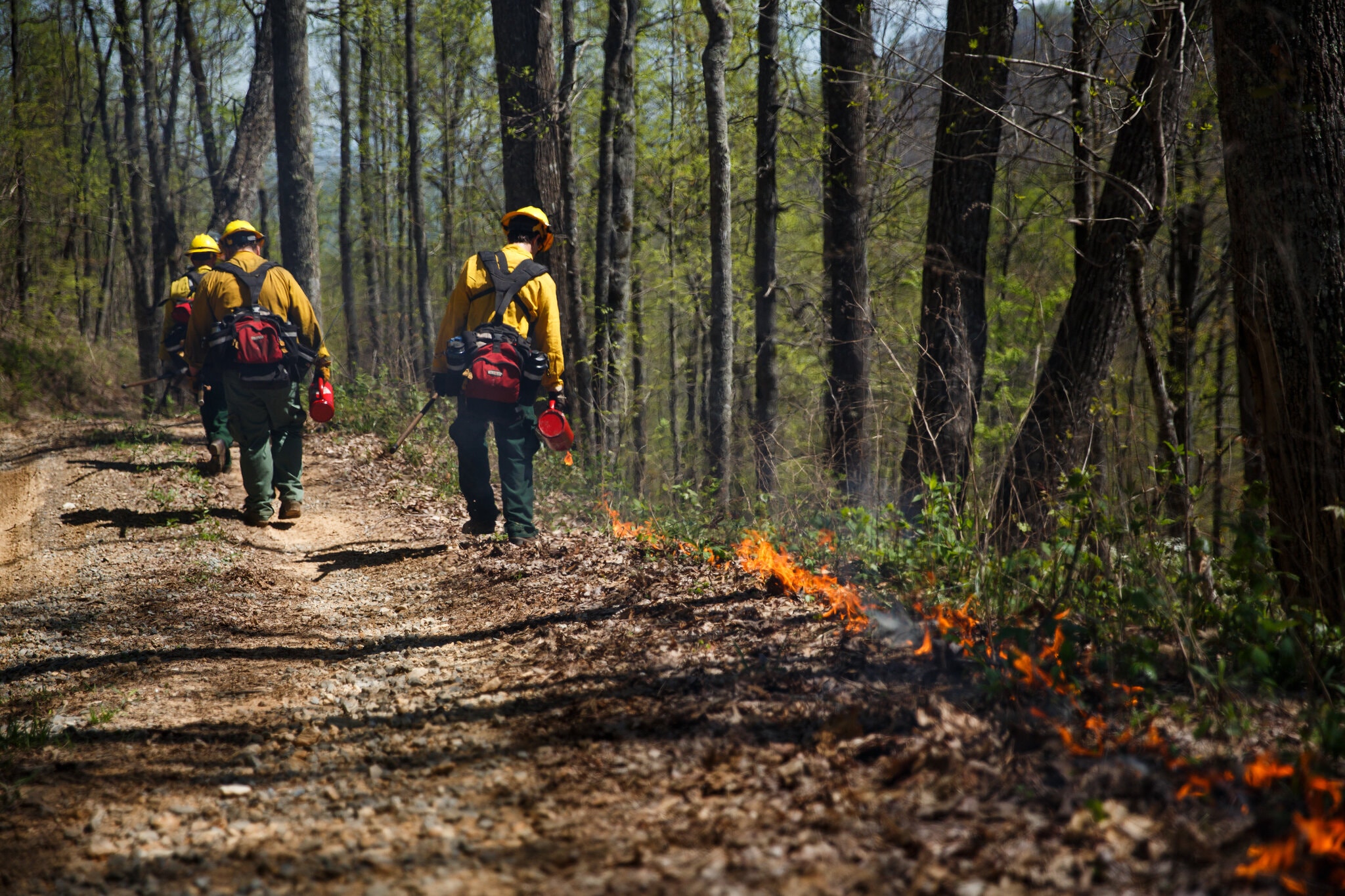 A prescribed burn on Brawley Mountain near Blue Ridge, Ga., last year. The practice, common in the southeast, is not widely used in Western states.Credit...Dustin Chambers for The New York Times 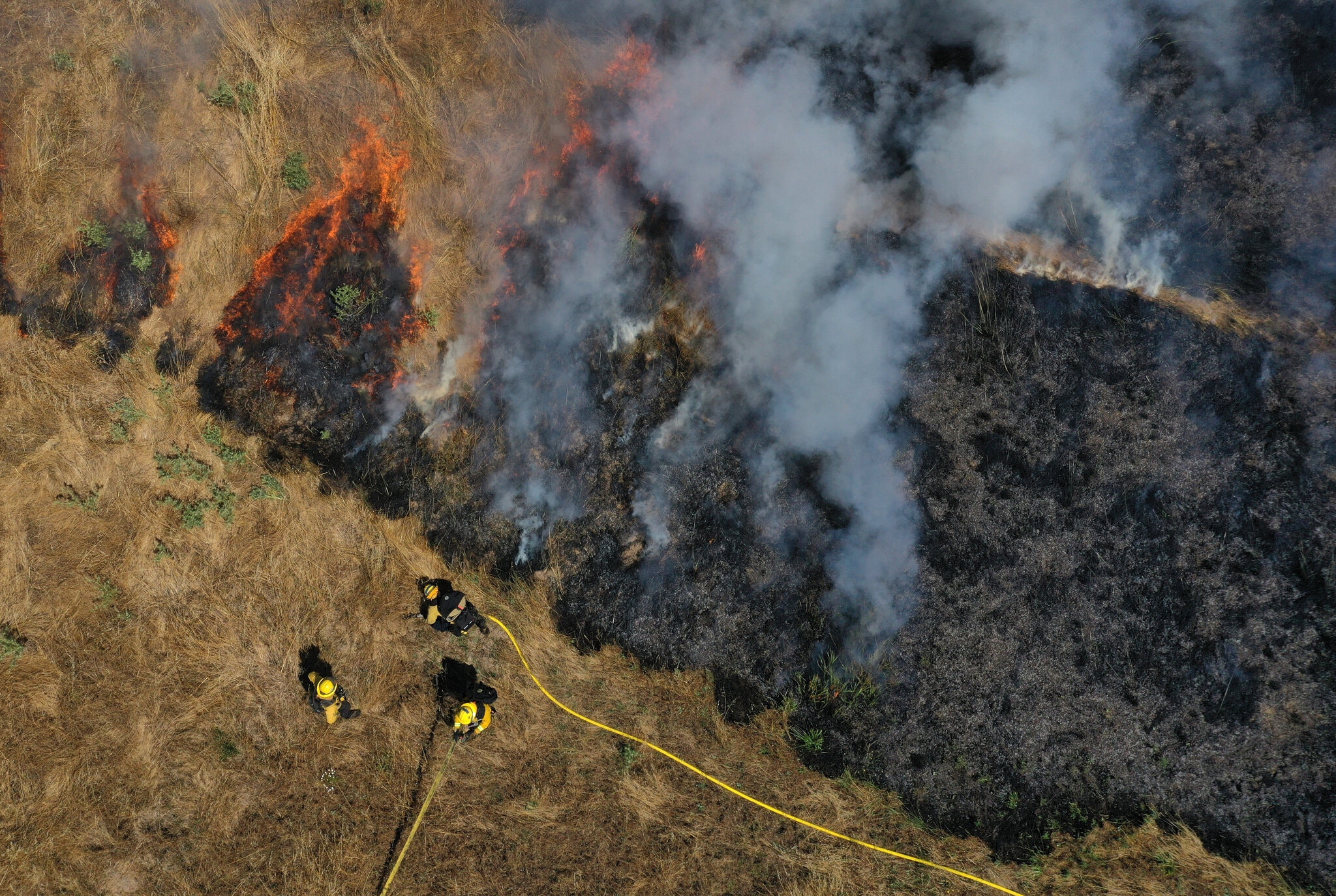 “Today fire is widely accepted as a tool for land management in the Southeast,” said Crystal Kolden, a fire scientist at the University of California, Merced.

But the scale is daunting: One study found that the state would need to burn or treat 20 million acres to counteract the legacy of fire suppression. (Researchers have estimated that in prehistoric times, around 4 to 12 million acres in the state burned each year, but that has since dropped precipitously.)

The obstacles to using fire this way are considerable: Fire agencies worry about intentional fires raging out of control, as happened in New Mexico in 2000, when a prescribed burn caught by high winds ended up destroying 435 homes. And the smoke can be a concern for nearby communities.

Using prescribed fire as a tool to manage forests will take concerted effort and a cultural shift in acceptance of fire, experts said. Dr. Kolden noted that many Indigenous communities have a long history of using fire to manage the landscape. “We should be empowering the people who know how to do this,” she said.

Finally, there’s climate change. Much of the fire-prone American West is expected to become even warmer and drier in coming decades, said Park Williams, a climate scientist at Columbia University’s Lamont-Doherty Earth Observatory. In a paper last year, Dr. Williams and colleagues noted that the effects of climate change on California’s fires so far “have arisen from what may someday be viewed as a relatively small amount of warming.”

The effect of climate change on wildfires isn’t linear but exponential, he said, and the climate will respond slowly even to aggressive action to combat warming. Therefore, any lack of strong action on climate will yield far worse wildfires.