By Henry Fountain, NY Times
December 7, 2021
The research adds to a growing body of work finding that climate change is increasing fire risk in California and elsewhere in the West. 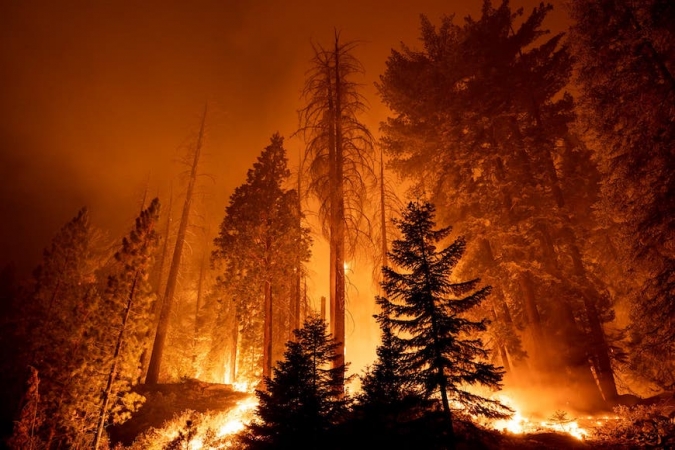 The Windy Fire burning in the Long Meadow Grove in Sequoia National Forest in California earlier this year.Credit...David Mcnew/Getty Images

The hottest summer days in the Sierra Nevada in California greatly increase the risk that wildfires will ignite or spread, and as the planet keeps warming the risks will increase even more, scientists said Wednesday.

The findings “show how short events like heat waves impact fires,” said Aurora A. Gutierrez, a researcher at the University of California Irvine and the lead author of a paper describing the work in the journal Science Advances. “We were able to quantify that.”

As for the projections over the next two decades, she said, “We are getting hotter days and that’s why the risk of fires is increasing into the future.”

Wildfires are increasing in size and intensity in the Western United States, and wildfire seasons are growing longer. California in particular has suffered in recent years, including last summer, when the Sierra Nevada experienced several large fires. One, the Dixie Fire, burned nearly a million acres and was the largest single fire in the state’s history.

Recent research has suggested that heat and dryness associated with global warming are major reasons for the increase in bigger and stronger fires.

The findings of the new study are generally in keeping with that earlier research, but there is an important difference. Most earlier studies looked at temperature and other data aggregated over monthly to annual time scales. The new research looked at daily data.

“What makes this novel is that we were trying to identify the role of individual temperature extremes on individual dates,” said Jim Randerson, the senior author on the paper and a UC Irvine professor of earth systems science.

“The observed and projected upward march in temperatures is compounding pre-existing conditions, namely fuel accumulation in our forest, to escalate fire risk,” said Dr. Abatzoglou, who was not involved in the study.

The researchers used meteorological data, averaged over the region, and fire data from two sources: California’s Department of Forestry and Fire Protection, which records with precision when fires begin, and sensors on two NASA satellites that can measure fire spread on a daily basis.

For Ms. Gutierrez, who worked in Dr. Randerson’s laboratory while an undergraduate at Irvine and full time there after receiving her undergraduate degree in 2018, that meant wrangling a deluge of data over many months.

But researching the link between daily extreme temperatures and wildfires was worth it, she said.

“We decided this is a question we need to ask,” Ms. Gutierrez said. “And yes, it’s a bit tedious with the amount of data we’re having to process, but it’s an important question.”

Over the past 20 years, the researchers found, a 1 degree Celsius (1.8 degree Fahrenheit) increase in mean summer temperature increased the risk of a fire starting on a given day — either by human activity or a lightning strike — by 19 to 22 percent, and increased the burned area by 22 to 25 percent.

Dr. Randerson gave an example of why extremely hot weather can lead to more, and more easily spreading, fires.

“If it’s a normal day, say 80 degrees Fahrenheit, and you accidentally create a spark and there’s an ignition, you can probably stomp on it, or local fire agencies can come and put it out,” he said. The vegetation still contains a significant amount of moisture that the heat from the fire must evaporate first. That slows the spread of flames.

But on a 100-degree day, Dr. Randerson said, the vegetation is so dry, with so little moisture to evaporate, that a fire spreads quickly, and grows.

“You get rapid expansion,” he said, “and eventually a fire so big it can last for weeks and weeks.”

John Abatzoglou, who studies the influence of climate change on wildfires at the University of California, Merced, said the work “adds to the growing scientific literature of climate-driven fire potential in forests of the West.”