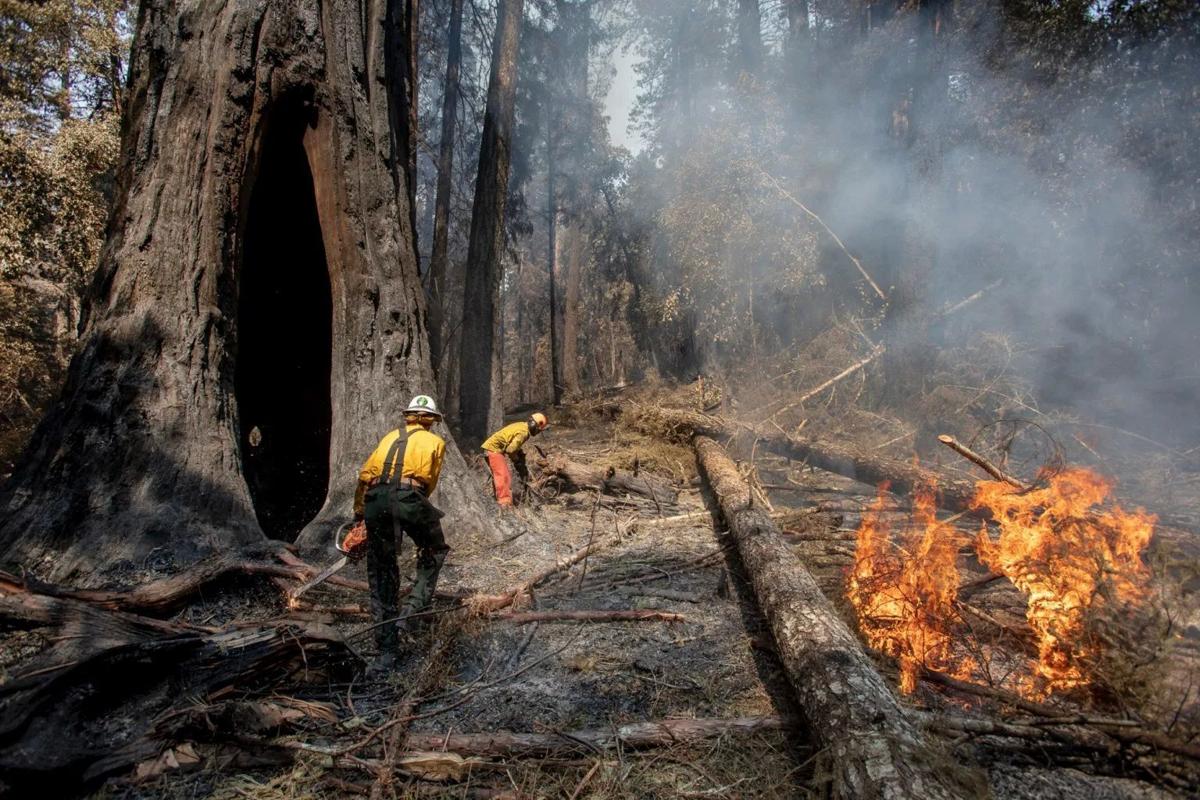 Firefighters Will Christianson and Jason Vincent clear away fallen brush from around the base of the Mother of the Forest redwood as hot spots from the CZU Complex fire continue burning in Big Basin Redwoods State Park on Aug., 28, 2020. Photo by Karl Mondon, Bay Area News Group.

In the annals of California’s wildfire history, so much is happening now that seems unfathomable: The number and size of this year’s fires — and their maddingly erratic behaviors — have created the worst season in the state’s modern history. Over 4 million acres have already burned, killing 31 people.

But what has stunned officials most about the state’s 8,000 fires is the location of the largest blazes: sizzling deep in stands of redwoods along what should be a fog-shrouded rainforest. The state’s oldest park, Big Basin Redwoods, was gutted by fire.

Researchers now worry that historic fire cycles are so far off kilter that even California’s “asbestos forests” — its millennia-old, misty coastal forests — have lost their limited immunity.

The North Coast’s trees — redwoods, oaks and sequoias — stand as a metaphor for power and resilience. Novelist John Steinbeck called redwoods “ambassadors from another time.” It’s not hyperbole: Coastal redwoods are the tallest living things on the planet, soaring up to 300 feet and living 1,000 years or more, and only growing in the ridges and valleys facing the Pacific, running from Big Sur in the south to the Oregon border in the north.

Home to mountain lions, bears, salmon and rare spotted owls and seabirds, the dense stands are now under attack from the same menace that stalks much of the state: wildfire.

“There is a collective sensation that we are reaching a tipping point,” said Lenya Quinn-Davidson, a fire specialist with the University of California Cooperative Extension. “This year was not just the fluke burning horrifically. This is 3.2 million acres of fire that burned in a month. It was complete triage and disaster.”

Five of the six largest fires in California history have occurred this summer. Climate change has been amplifying these extreme fires, abetted by extended drought, record heat waves and an epidemic of millions of dying trees, according to climate and fire scientists. August was the hottest month in California history.

The coastline is experiencing less fog and higher summer temperatures, especially at night. Lightning was responsible for sparking the state’s largest fire, which has already charred more than 1,300 square miles of the North Coast’s forests since mid-August.

But rather than an anomalous freak of weather creating once-in-a-decade wildfires, experts say the recent blazes provide a vision of a future with much more fire endangering the North Coast’s pine and oak forests.

“We’re starting to see fires and devastating type of activities in the redwoods, which doesn’t happen. In our lifetimes, this has not happened,” Cal Fire Chief Thom Porter recently told CNN.

The ancient conifers and oaks of the North Coast are historically so resilient to fire that they are known as “asbestos forests.” Fire has long been part of the coastal landscape, yet the typical low-intensity burns don’t permanently harm redwoods because they are armored in two-foot-thick bark. But uncontrolled fire among giant trees is a more urgent matter that poses a new danger to the forests.

“There’s a long-held belief that redwood forests just don’t burn or are resistant to fire. Not true,” said Angela Bernheisel, a Cal Fire Division Chief in the San Mateo/Santa Cruz Unit, where multiple fires are burning in coastal zones.

Even the recent high-severity fires are not likely to kill entire forests. Older, larger trees can withstand scorching. Park officials at Big Basin Redwoods said that flames burned the understory but the tallest trees are expected to recover.

But Bernheisel said the ferocity of this year’s fires in the big trees should sound an alarm about the changes underway in California’s forests.

“My hope is that this fire and the new awareness that people have of the risk that is out there will actually move people to action,” she said. “There’s a big backlog of work to do.”

The “work” is the expensive and time-consuming task of burning or cutting through millions of acres of overgrown tracts, some of them untouched by any modern management.

The forests holding towering redwoods and pines are many times more dense than at any time in their history, Quinn-Davidson said.

Based in Eureka, in the heart of Humboldt County’s rainy, gloomy Redwood Empire, Quinn-Davidson said the forests don’t resemble their former state. “They are suffering from the same things that the rest of the state forests are, they are poorly managed and have fuels buildup.”

The state’s 2018 Fourth Climate Assessment delivered a trifecta of dire conclusions for the North Coast: “Future wildfire projections suggest a longer fire season, an increase in wildfire frequency, and an expansion of the area susceptible to fire.”

The long-range forecast for the North Coast projects that rain will fall in shorter, more intense storms, which means the water flows over hillsides rather than soaking into soil to nourish the trees and protect against fire.

Average annual maximum temperatures in Mendocino, Humboldt, Del Norte, Lake, Trinity and Siskiyou Counties could increase by as much as 9 degrees through the end of the century, the report concluded.

“The weather and climate is impacting these areas. Last year we were at 60% of average precipitation. We’re drier than normal,” said Scott Stephens, a fire scientist at UC Berkeley. “So when lighting strikes, you get an overwhelming number of ignitions in fuels that have been preconditioned to burn.”

Drought has primed diseased trees to burn, especially in the fire-prone Sierra, where more than 163 million dead trees litter the landscape. But coastal species have been fallen by disease, too, decimated by Sudden Oak Death and pitch canker in Monterey pines.

Even the fog that reliably blankets the North Coast is dissipating. Research from University of California, Berkeley found that fog frequency has declined by a third compared with a century ago.

Because the oceans have warmed, their cold, deep water can’t mix with warmer surface water, which weakens the upwellings that create the coast’s fog.

“Coast redwood and other ecosystems along the United States west coast may be increasingly drought stressed under a summer climate of reduced fog frequency and greater evaporative demand,” the study found.

Fog is critical to tree health because coastal forests receive as much of a third of their water from fog banks, absorbing moisture through their leaves or needles. A decline in the marine layer that tempers the sun’s radiation also results in dry soils and stressed, fire-ready vegetation.

“The piece of this that is associated with climate change is that the redwoods were drier than normal to start with because of a coastal drought, how hot it was this summer and the increase in nighttime temperatures,” said Kolden. “The same high pressure system that produced high heat across California causing power emergencies is what kept the marine layer offshore.”

The fires are causing North Coast residents to wonder if their homes and beloved forests are in jeopardy.

“Even here in Humboldt County — we are right on the ocean, basically in a rainforest — people are starting to look around and say, ‘Is my house ready for a wildfire?’ I’m hearing those conversations,” Quinn-Davidson said.