Is California Heading For A Multi-Year Drought? The Odds Aren’t In Our Favor, Experts Say. 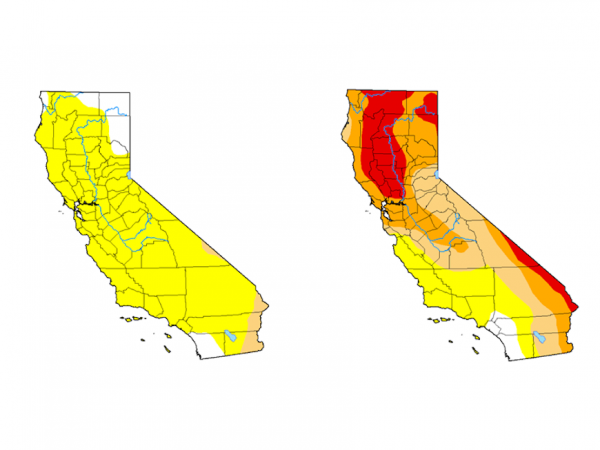 With no rain in the forecast for the rest of 2020 — thanks to a La Niña weather pattern pushing storms north of the state — the probability of California entering a multi-year drought is increasing.

“We did fortunately get some rain in November,” said Michelle Mead, a warning coordination meteorologist with the National Weather Service in Sacramento. “However, since that time, it has been drying, and we even had some wind events. So we're very quickly back into fire season.”

An autumn with little rain and a forecast for a dry December is reminding weather and climate experts of the patterns that took place before last year's mild winter. That season, much of the state only got about half of what’s normal, bringing a majority of Northern California into what could be two years of below average precipitation.

With more than two-thirds of the state experiencing some sort of drought and water supplies just below average, another dry year wouldn’t break the bank. But it could point to a trend — mulit-year droughts — not too far back in California’s memory.

But what happens with La Niña heavily determines what the water year will look like, said Stanford climate scientist Noah Diffenbaugh.

”It's not just bad luck. There are configurations that tend to tip the odds towards more dry conditions,” he said. “It's very consistent with a climate that gets warmer and is more prone to prolonged warm, dry conditions punctuated by wet conditions.”

La Niña historically has meant drier, colder winters in California. The weather pattern occurs in the Pacific Ocean where strong winds blow warm water at the surface of the ocean from South America to Indonesia. As the water moves west, cold water moves to the surface near the coast of South America. This results in storms mostly landing in the Pacific Northwest versus California.

Are We Headed Into A Multi-Year Drought?

Climate scientists and meteorologists are mulling this question because it's common for California to go from drought years to wet years. But the past few years have all been very warm, which increases drought severity, says Dan McEvoy, a climatology research professor with the Desert Research Institute in Reno.

“There's not a single storm expected in the next week and if you look out to about two weeks, it's staying quite dry with very, very minimal precipitation,” he said. “We're starting to kind of get into overlapping dry seasons, where we had last year ended up being really dry and we're falling into drought this year again.”

McEvoy recently co-authored a paper that found warming temperatures mean a 2-fold increase by 2039 in the likelihood of a multi-year drought occurring. That grows to 15-fold by the end of the century.

“As we go into the future we can expect more of those severe multi-year droughts … even in years or locations where we have precipitation not changing that much in the future because the temperatures are changing,” he said.

“For the reservoirs, they can sustain California water supply for up to three years without any degradation,” said Mead with NWS. “But after three years, if we don't have a good winter, then of course we look to the state to figure out water restrictions and things of that nature.”

Michael Anderson, state climatologist with the California Department of Water Resources, says it is too early to worry because of how variable the state’s climate can be.

“It's very tricky for California,” he said. “We have the largest year to year variability anywhere in the United States. We can go from 2019, that had one of the wettest February's on record, then 2020 comes along and it’s the driest February on record and we have a dry year.”

That back and forth nature of California’s climate, amplified by warming temperature, is what UCLA climate scientist Daniel Swain calls climate whiplash. He says it will most likely get worse as the globe warms and that the state “will likely experience an increase of anywhere from 50% to 150% (highest in the south) in the frequency of very dry November-March periods similar to 1976-1977 (and only slightly drier than 2013-2014), which have historically occurred about once per century.”

California reservoirs are just starting to dip below average, Anderson says, and he hopes the ridge of pressure pushing storms to the north weakens as autumn turns into winter.

"What we don't know is as we get into winter, which starts [December ] 21st, we might see that pattern shift,” he said. “Where the high may move to the west, which would open the door for those cold storms to drop in out of the Gulf of Alaska.”

If that happens, California could break the cycle of a potential multi-year drought. But Anderson says there are a lot of unknowns.

“We've had dry starts like this, and I've seen that kind of storm door open and that leads to then a wet December, January, February,” he said. “I'm really gonna have to wait and see how things evolve.”

But Isn’t The West In A Megadrought?

This spring a group of researchers released a paper saying that the southwest portion of North America is dealing with something larger than droughts lasting three to five years. They say a larger trend of warming and drying has resulted in what they call a megadrought that’s lasted from 2000 through 2018.

They liken the current megadrought to medieval megadroughts and this one brings up major questions about human-caused climate warming.

“What we're seeing through this 20-year period corresponds with sort of mediocre precipitation,” said John Abatzoglou, a UC Merced climate scientist and co-author of the study. “That's taken what would have been in pretty sort of, you know, normal-ish drought into making it the second-worst megadrought in 1,200 years.”

He says climate change has played a significant role in creating this megadrought by drawing more water out of the soil and in turn stressing the environment.

“We haven't recovered from the megadrought, that's pretty clear to me,” he said. “If you look at groundwater levels in the Central Valley, they're depleted. And we know that during drought years, we tend to pull more from groundwater. That limits our ability to have that buffer in future dry years. So, the last thing we need right now is to have years like this.”