California Sunshine Could be Key to Combating Drought 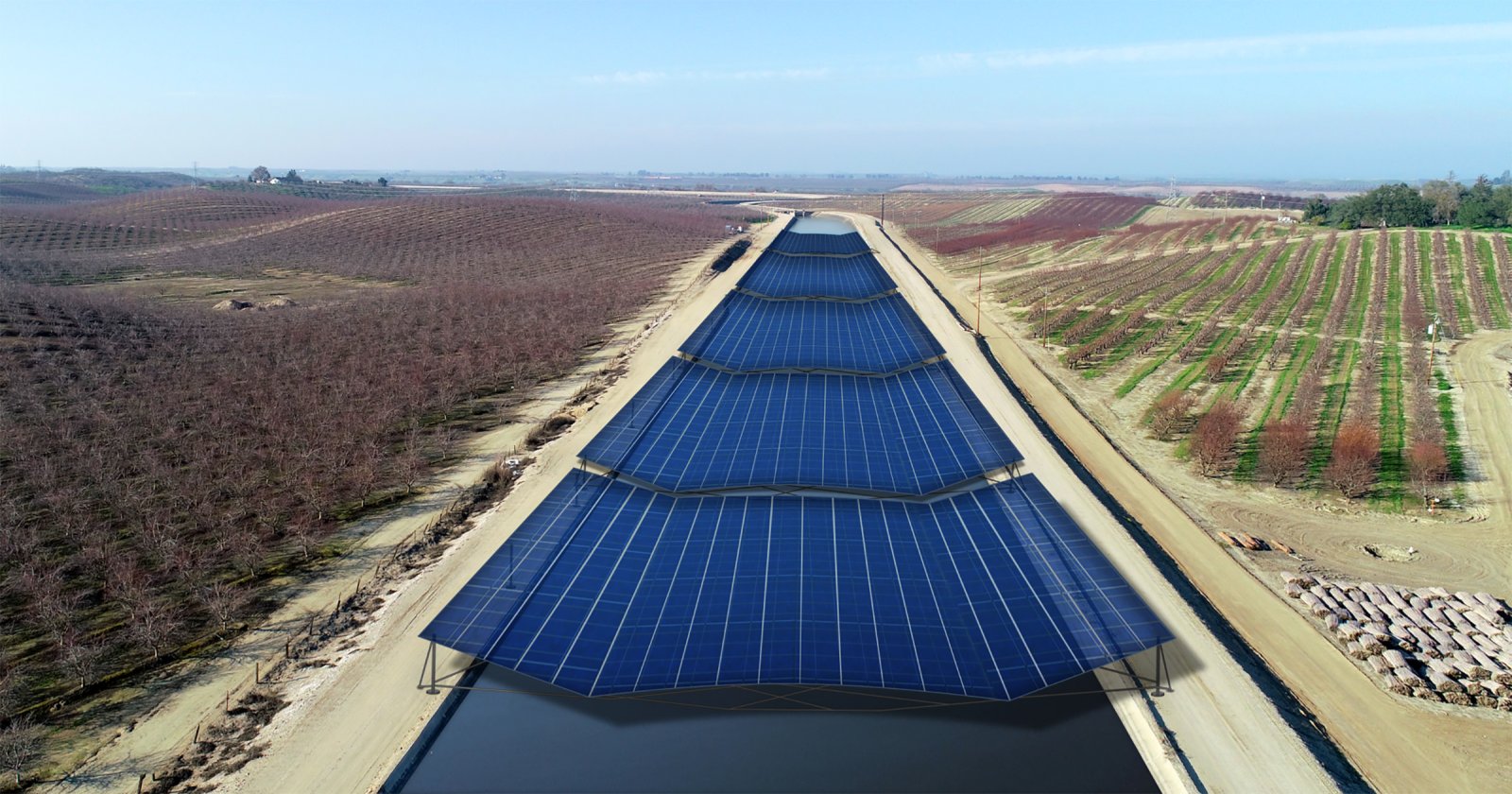 Some ideas are so satisfying that you wonder how they haven’t been done before. Solar canals, which will get their first U.S. pilot later this year in California, fit that mold. Western states are crisscrossed by thousands of miles of irrigation canals, some as wide as 150 feet, others just 10 feet across. By covering those channels with solar panels, researchers say, we could produce renewable energy without taking up precious land. At the same time, the added shade could prevent billions of gallons of water loss through evaporation.

“I’ve received several emails from people saying, ‘Hey, that was my idea ten years ago! But nobody wanted to do it,’” Roger Bales, the engineer leading the pilot, says with a laugh. India has been building solar canals since 2014, and the idea has also been explored in Costa Rica. But in the U.S., plans for solar canals have long been mired in inertia, with a lack of information about the benefits meaning no one wanted to pay the potentially higher upfront costs compared to building a conventional solar farm.

That changed last year. Bales and colleagues at the University of California, Merced and and Santa Cruz, published a study showing that, if California topped all 4,000 miles of its canals with solar panels, the state could save over 65 billion gallons of water a year. That’s enough to irrigate 50,000 acres of farmland or provide water for the homes of more than two million people. They estimate the solar aqueducts would generate around 13 gigawatts of energy—roughly half of the new renewable capacity that the state needs to meet its goal of generating 60% of its electricity from clean sources by 2030.

“If California can’t save the world, I’m not sure who can”

In February, California’s Department of Water Resources awarded a $20 million grant for Bales’ team to build a prototype, which will cover 8,500 feet of canals in the San Joaquin valley’s Turlock Irrigation District. Project developer Solar AquaGrid is currently designing the system, and its first stretches—likely generating roughly 5 megawatts altogether—should be up and running by early 2023.

The Turlock district, which provides water to 4,700 farmers across 150,000 acres, reached out to Solar AquaGrid to volunteer for the pilot: the district, which also controls a publicly owned electricity utility serving over 240,000 people, is looking to scale up its renewables supply to meet the state’s clean energy goals, and wants to see if solar canals can help them get there. Local officials were also interested in the project’s plan to build energy storage into the panel coverings, Bales says, which will allow the district to release energy into the electric grid at times when the sun isn’t shining and supply is lower. 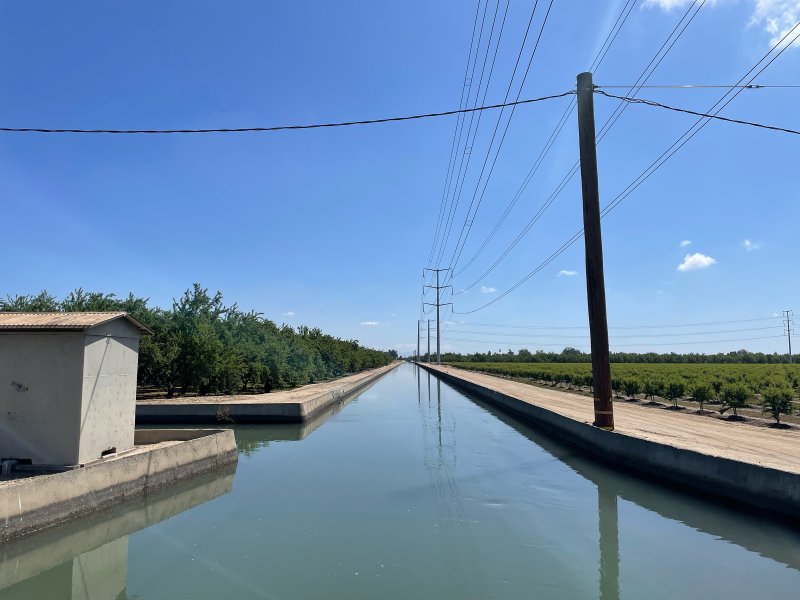 Bales has worked on climate issues since the 1980s, spending the first half of his career in research at the University of Arizona, and he’s used to the slow pace of progress. But he says he’s finally seeing momentum around climate solutions in California, where he moved in 2003. “I thought this was probably the best place to advance solutions: We have the technology, we have the funding. We have the economy. We have the political will, in most cases,” he says. “If California can’t save the world, I’m not sure who can.”

Scaling up solar without eating up U.S. land

Bales has spent the last two decades leading the Sierra Nevada Research Institute, trying to improve understanding on how climate change is affecting the water system in that region, and how the mountains’ forests drought resistance would change as California’s climate shifts. Now, the institute, where he remains co-director, is trying to connect scientists with financing to carry out urgent forest restoration.

The solar canals project is part of this new phase in his career, dedicated to focusing more on solutions than research. The key to climate action, he’s found, is an area not often associated with scientists: communication. “To deliver projects that meet multiple needs, you have to get lots of different agencies—state and local—working together,” he says. “So here I am, an engineer at this point in my career, trying to get people to talk to each other.”

It seems to be working. After the 2021 study’s release, Bales was “overwhelmed” with calls from media, local officials, and even U.S. Senate staff expressing interest in building solar canals. The enthusiasm makes sense: to meet the Biden Administrations’ ambitious targets, solar needs to scale up rapidly, from 2.8% of U.S. electricity today to as much as 45% by 2050—requiring an area of land twice the size of Massachusetts, per official estimates. The expansion, however, may conflict with the government’s plan to conserve 30% of the nation’s lands and waters by 2030. It is already causing friction with local governments and activists, who have opposed projects from Texas to Maine over concerns including the loss of farmland and wildlife habitats. Covering aqueducts could avoid such impacts while contributing to the nation’s solar needs, along with conserving precious water as droughts continue to worsen across the western U.S.

But there’s a long way to go before solar canals reach the kind of scale that the 2021 paper imagined—and not all stretches of California’s canals will be suitable for solar installations, Bales says. His team will monitor the Turlock pilot for around two years, and try to launch other projects during that period, before the state decides how far to take the idea.

One potential problem lies in making sure that utilities can still access the canals to carry out maintenance. The team is experimenting with modular designs, to allow for the temporary removal of parts of the system, Bales says. And, he adds, the panel covering should reduce the need for maintenance in the first place: keeping sunlight off the canal should reduce algal and weed growth, and therefore reduce the need to treat the water for drinking. (Bales’ team does not foresee a significant impact on water birds, who have been known to drink from irrigation canals, but a representative of bird-conservation non-profit The National Audubon Society will help them monitor this during the pilot, he says.)

The greater challenge, as with many climate solutions, lies in showing that solar canals are cost-effective. The process of installing panels over canals—using either a steel truss or tension cables—will be more expensive than mounting panels on the ground, increasing the cost of generating energy. For the 2021 study, the authors estimated that installing panels over canals using a steel truss would mean a total average project cost of around $2.02 per watt, and for panels installed using tensioned cables it would be $1.82 per watt. That is slightly higher than the estimate for conventional ground-mounted panels on land next to the canals of $1.66 per watt.

But Bales points out that the ground-mounted estimate does not include the price of the land. When cost savings from not having to use up agricultural land, avoiding water loss, and maintenance are taken into account, he says canal-mounted panels would be “very competitive.” “There are still some unknowns. Is it going to cost 5% more than our projections? 10% more? Or are our cost estimates too high? We will find out.”