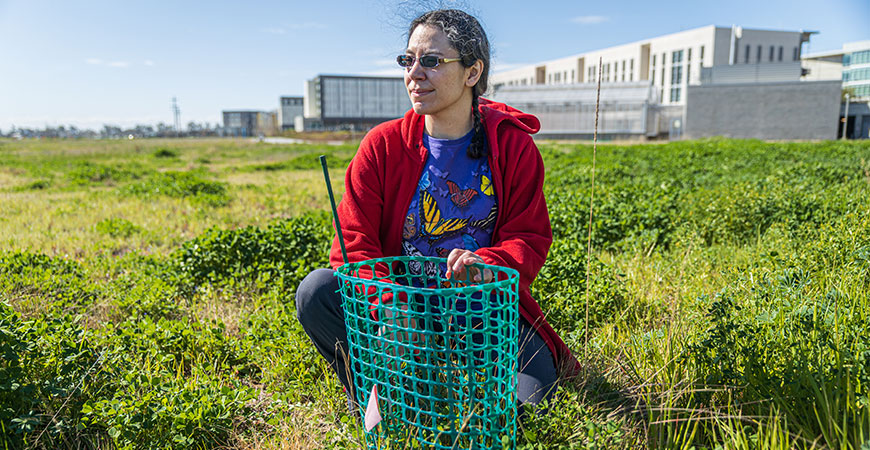 Life and Environmental Sciences Professor Emily Moran and collaborators at several other universities are set to conduct a continental-scale analysis of climate change effects on tree reproduction.

In addition to monitoring seed production, thanks to a new grant from the National Science Foundation the researchers will also be able to assess the establishment of young trees and the correlation of seed and seedling production with the activity of animals. Because animals can both disperse seed and feed on seeds and seedlings, they likely play an important role in whether trees are able to reproduce and thrive.

“The sustainability of North American forests depends on seed production by trees as well as seedlings that must establish for the next generation of trees,” the team states in its grant abstract. “Population spread beyond current frontiers will be governed by seed production of trees (fecundity), germination and seedling survival — the capacity of trees to produce seed and disperse it to the habitats where populations can survive in the future.”

The new project builds on one that Duke Professor James Clark organized, incorporating data collected by Moran and many other forest researchers. That project has already resulted in several high-profile publications.

“All of us have these forest plots across the United States where we're doing similar things, looking at seeds and seed production, the success of seedlings and so on,” Moran said. “We found that there are both direct and indirect climate impacts on how much seed trees are producing, and different impacts in the East and the West.”

But the plots the scientists have been working on are small and don't provide a clearer picture of what's happening across the continent. The scientists need broader, deeper information to model and plan for the effects of future climate change.

The team, led by Clark and including co-principal investigators at North Carolina State, the University of Michigan and UC Berkeley as well as UC Merced, plans to gather data on the changes that are happening now across the continent in tree reproduction, and understand the effects on animals that rely on the trees for seeds, fruits and nuts.

The team plans to implement several types of survey activity including camera traps, bird counts, seed trapping and counts of seedlings, saplings and cones/fruits. Team members will also develop new techniques to do more spatial sampling and use new statistical methods to combine data. All the data gathered will help them develop a monitoring and data collection network. This is needed for the next generation of forest science and management that will help researchers understand the food web implications of environmental change and other complex environmental questions.

Moran’s lab is looking to recruit a new graduate student, who would design a Ph.D. project based on the data collected, as well as several UC Merced undergraduates each summer from 2023 through 2026 to help with field measurements.

There is also an opportunity for the public to participate in this project as “citizen scientists” by using an app called iNaturalist to help with seed counts. Those who are interested can go to a website managed by Clark’s lab to find out more about how to sign up and what information to record.

“We’re looking for trees that are not watered," Moran said. "Nothing standing in a lawn with sprinklers. But if you are going out hiking in the mountains, you can help us out with this project.”